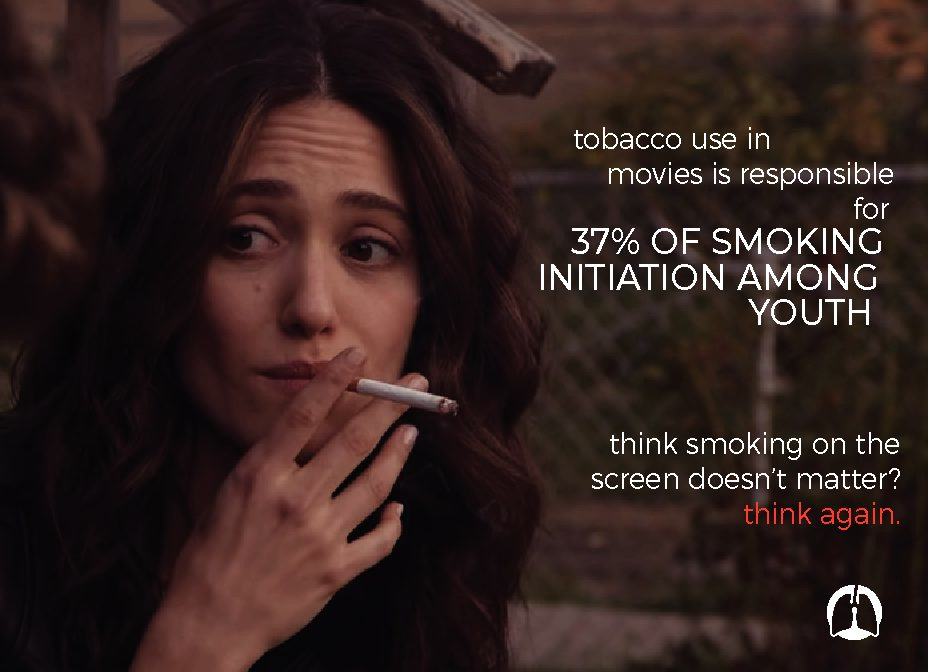 Since the COVID-19 pandemic has placed many of us in social isolation, it has left some of us looking for comfort and safety in front of our favorite TV shows. For some, streaming and binge-watching movies and TV has become a necessary lifeline during stressful times. Films and TV shows are being released earlier due to public demand for streaming content. This increased demand has also increased the reach of the tobacco industry with on-screen tobacco-use being viewed at a much higher rate than ever before. The amount of smoking in top-grossing movies rose to 3,618 incidents in 2019, the most in more than a decade. The World Health Organization and Centers for Disease Control use this data to educate people on the dangers of tobacco use.

While binge-watching shows may bring comfort to many during the stay-at-home order, it also brings forth some major public health concerns. Why the cause for concern? Tobacco use remains the leading cause of preventable death and disease in the United States. One of the major concerns is exposing youth to the glamorization of tobacco on-screen.

Our most recent study with the University of California San Francisco shows that exposure to tobacco on-screen (whether in movies or streaming shows) is a significant risk factor for youth smoking initiation. The Center for Disease Control has projected that smoking on screen will recruit more than six million new young US smokers in this generation, killing two million of them. In fact, since the shelter-in-place order took effect in March, the US audience for streaming channels grew by 50-60%, according to Nielsen tracking. And children and adolescent viewers grew by nearly 66.7%.

Since the shelter-in-place order took effect in March, the US audience for streaming channels grew by 50-60%. Younger viewers grew by nearly 66.7%.

Smoking in movies is responsible for 37% of youth smoking initiation. It’s easy to see why seeing on-screen tobacco use by favorite actors at even higher unprecedented rates, does more damage than many people realize. In the past year, media investors, US Senators, and 43 State Attorneys General have pushed top streaming companies to be held accountable and come clean about their relationship with the tobacco industry and content being pushed on our youth to addict another generation of smokers with their deadly products. Instead, these streaming channels continue to deceive the public’s trust during a national health crisis.

Some of the television shows that displayed the most tobacco imagery (in no order), were Euphoria (HBO), Big Mouth (Netflix), and Sex Education (Netflix). On the opposing end, some of the shows that were reported as being tobacco-free include: Mandalorian (Disney+), Marvel’s The Punisher (Netflix), and The Big Bang Theory (CBS). If current rates continue, according to the Surgeon General, 5.6 million youth alive today who are projected to die from tobacco related diseases.

Want to help us protect youth from movies and television shows packed with toxic tobacco content? Sign this petition to give smoking in movies an ‘R’ rating, or download our ‘What is Hollywood Hiding’ action guide.

Breathe has been on the forefront of this work for the past twenty years, educating youth to eliminate the influence of tobacco on-screen, and rigorously training youth to monitor films for tobacco content with our data collection program, Thumbs Up! Thumbs Down! (TUTD). With the streaming revolution changing the way we consume media, Breathe has been collecting valuable data on tobacco content across top streaming platforms such as Netflix, Hulu, Amazon Prime Video, HBO, Disney+ and more.

This year, a team of seven interns and Breathe staff members used an evaluation form (standardized officially by our work in evaluating movies through the TUTD Program) to collect information regarding tobacco use in television episodes. This data includes where tobacco is used, by whom, messages of the tobacco use (i.e. pro-tobacco or anti-tobacco), and much more for each episode.

After analyzing 500+ hours of TV shows across 296 episodes, we found that tobacco imagery appeared in a total of 71 episodes. Though the total of overall tobacco incidents declined from last year, specific tobacco product types did increase significantly. Vaping products jumped up by 456.25% from last year and cigars on-screen rose 30.43%.

Smoking and vaping on TV and in movies is still a serious issue and a well-documented recruitment tactic from the tobacco industry. With young people at home more than ever, it is important to be aware of what media they are consuming and understand the influence of Big Tobacco on-screen, and in your home.

For more information on tobacco in the media, please check out our website in collaboration with the University of California, San Francisco here or visit the Breathe website here!